As Halloween is fast approaching, we thought we would share this “spooky” tale of how poor food choices might have led to the rise of vampires.

Legends of vampires were likely developed from communities with increasing fear of disease. Eighteenth and nineteenth century villagers used their belief in fables, such as vampires, to explain the unknown. Several diseases have been linked to the creation of vampire folklore including rabies, tuberculosis and pellagra. Pellagra is a dietary deficiency of niacin. Niacin (Vitamin B3) turns food into energy and helps keep your nervous system, digestive system and skin healthy. Sources include yeast, milk, meat, poultry, fish, eggs, leafy greens, whole grains, nuts and seeds.

Pellagra became a common illness after American corn was introduced to Europe. Europeans shifted from eating primarily rye and wheat to corn. As the poor relied increasingly on cornmeal as the primary source of energy in their diet, pellagra outbreaks rose. Pellagra has some serious and eerie symptoms. They include:

So perhaps before Pellagra was diagnosed as a disease, societies were fearful of the unfortunate, Niacin-deficient, pale, light hating, crazy-acting, malnourished souls and made up some scary stories.

The good news is pellagra is very rare today due to better processing of corn, keeping those vampires away! 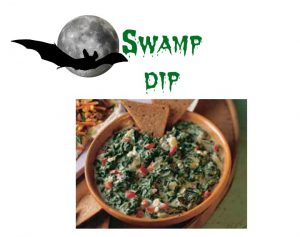 Directions:
1. Melt butter in skillet until sizzling. Add onion, red pepper and garlic. Cook over medium heat, stirring occasionally for 5-6 minutes or until onion is softened. Whisk in flour and continue cooking for 1 minute. Whisk in broth and whipping cream. Continue cooking, whisking constantly for 2-3 minutes or until mixture is thickened.
2. Stir in cheese, yogurt, spinach and hot pepper sauce until spinach wilts and mixture is heated through. Remove from heat and season with salt and pepper to taste.
3. Serve warm with assorted vegetables such as carrot and celery sticks.

Our staff is happy to answer any questions you may have about losing weight on the Figure Weight Loss Program. Please contact us via phone or fill out the form for more information.

Fill out my online form.